A fair few of my working ISA Server and Forefront TMG deployments are used to publish and protect SharePoint environments.

Since the gradual move of many customers to SharePoint 2010, I have noticed that the Test Rule button that is available as part of the web publishing rule created by the SharePoint Publishing Wizard, often produces errors, even though external access to SharePoint via Forefront TMG seems to be fully functional. As many customers use this feature as an initial sanity check for publishing rule configuration (as I do myself) this can actually lead many people to believe there is a SharePoint publishing problem, when in fact there isn’t! An example of the errors can be seen in the screenshot below:

After being asked by a few bemused customers why this was happening, I decided to investigate the issue at little further. This blog article provides an overview of my investigations, thought process and conclusions.

My first assumption was that this issue was introduced as customers moved from SharePoint 2007 to SharePoint 2010, combined with the fact that the SharePoint Publishing Wizard included with Forefront TMG appeared to defined the paths generically for SharePoint, as opposed to version specific. The paths also appeared unchanged from the same wizard in ISA Server, even though support for SharePoint 2010 wasn’t specifically added until Forefront TMG Service Pack 1 was released. As discussed above, I was confident that in most cases the issue was purely cosmetic and a failure in the Test Rule output didn’t specifically mean SharePoint publishing would fail or was configured incorrectly in any way.

After a bit of testing, it was apparent I could get consistent failures in the Test Rule feature for the following paths:

as shown in the screenshots below:

Confusingly, both paths didn’t fail consistently for different SharePoint environments I tested. Sometimes just one path would fail, other times both paths would fail. How strange

After researching the _upresources/ path, it became apparent that there were very few search results that included the _upresources term in the context of SharePoint itself. Sure, there were lots of references to _upresources in the context ISA/TMG and SharePoint. After looking at numerous SharePoint deployments, I couldn’t find a single one that actually had a virtual directory called _upresources; a majority of them did, however, have a virtual directory called _wpresources. I decided to lookup the use of this folder and determined it was a folder that contains a web.config file used in Web Part resources and hence a pretty core part of any SharePoint deployment. This made me suspicious and my instant thought was “No, surely the wizard doesn’t contain an incorrect path statement or typo?” I looked back at documentation I have done for customers running ISA Server over the years, and saw the same _upresources/ path statement in those rules too. Maybe this issue had been around for a long time, and just never noticed and/or publically acknowledged by Microsoft in a KB article. Maybe SharePoint used to use this path, but it has been removed in more recent versions.

This made me think about authentication configuration within IIS. Further testing revealed that the SharePoint environment that returned the HTTP 401 error had been specifically configured with Anonymous Access disabled at the site level in IIS, as shown below:

The net result of this was that IIS would generate a HTTP 401 response, even though the requested path was not valid (remember _upresources didn't actually exist).

For the SharePoint environment with Anonymous Access enabled at the site level (as shown below), IIS would correctly generate a HTTP 404 response as the requested _upresources path was invalid and authentication was not required to access this resource. 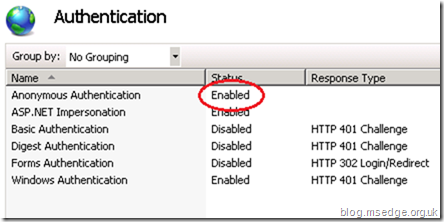 So, given the actual configuration of the IIS site hosting SharePoint, we would get a HTTP 401 response or a HTTP 404 response. Consequently, the Test Rule function would indicate a success or failure based upon these error codes, as shown below:

As the Test Rule function is not able to provide credentials to IIS, I would assume that it is designed to treat HTTP 401 responses as an indication that the path is present and consequently pass the test. However, this logic seems a little flawed if you think about the implications of this logic when the path doesn’t actually exist but IIS requires authentication; but you could argue that one would expect Anonymous Access to be disabled at the IIS site level for a majority of SharePoint deployments that are protected by Forefront TMG. Unfortunately, I don’t really know enough about SharePoint to validate this statement.

Based upon the above testing and findings, I concluded the following:

As it is not possible to easily modify the path statements added by the SharePoint Publishing Wizard, I believe the issue will need to be fixed by Microsoft within the wizard code in order to correct the paths, or logic, and remove the undesired results provided above. For now, I hope this blog article at least puts your mind at rest if you have experienced the problem first hand and then assumed you had done something wrong. The chances are that if at least one of the path tests succeeds, you should be good to go…

Please Note: I am currently trying to confirm my findings and conclusions with Microsoft, so I will update the article when I have more information.

UPDATE: Spoke to a couple of contacts at Microsoft (thanks Jim and Yuri) and it does look like the incorrect _upresources path is indeed a TYPO and the HTTP 401 success behaviour is by design, as discussed here: http://blogs.technet.com/b/isablog/archive/2010/02/24/understanding-test-button-results-on-forefront-tmg-2010.aspx